I was digging around a few of my favourite design websites and found this little ditty. Im sure some of you must remember collecting the Garbage Pail Kids stickers and biting into the stale powdered gum that lay within the wax papered packaging. Take a read and let me know you used to collect.

If you were ever once a kid chances are there was something you loved to collect. For me it was Archie comics, for my brother it was lead soldiers and baseball cards, for my BFF up the block it was miniature spoons (don’t ask) and for some kids who were of prime collecting age in 1962 it was the graphic Mars Attacks trading cards. Before Tim Burton directed his 1996 film version (inspired by, methinks, the series’ 1994 rerelease), Mars Attacks was a trading card series produced by Topps, a company better remembered, perhaps, for their baseball cards packaged with a bright pink piece of Bazooka Joe brand bubble gum, which was manufactured onsite at their headquarters in Brooklyn. The Mars Attacks card packs also came with a heavily powdered slab of the delightfully difficult-to-chew gum, but unlike Topps’ other long-running series, Mars Attacks’ saga of alien destruction was considered too controversial and was shut down soon after production began. 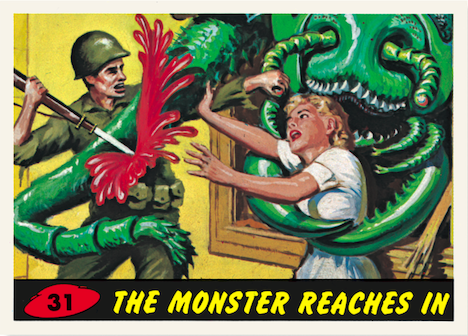 The scenes depicted on the cards were actually toned down from even more gruesome images of dogs set ablaze by laser beams and battered corpses, human and alien alike, but parents, teachers, reporters and the local DA thought the battle scenes were still too bloody and the women way too buxom for young children’s eyes. 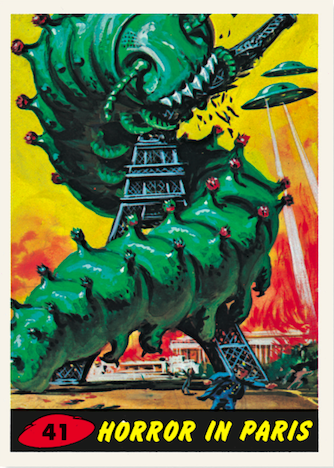 After printing ground to a halt the cards’ value soared; A full set of 55 cards is worth $25,000 today—more if you throw in an original wrapper or two. Adding to its cult classic status is the fact that the artwork for Mars Attacks was painted by Norm Saunders, “one of the most lauded pulp cover illustrators of the 40s and 50s.” Since every card needed to pop with the action and intensity of a pulp book cover, Saunders’ contribution was instrumental to the cards overwhelmingly popular reception amongst kids and teenagers as well as the adoration of fans that lives on today.

For the full article check out..